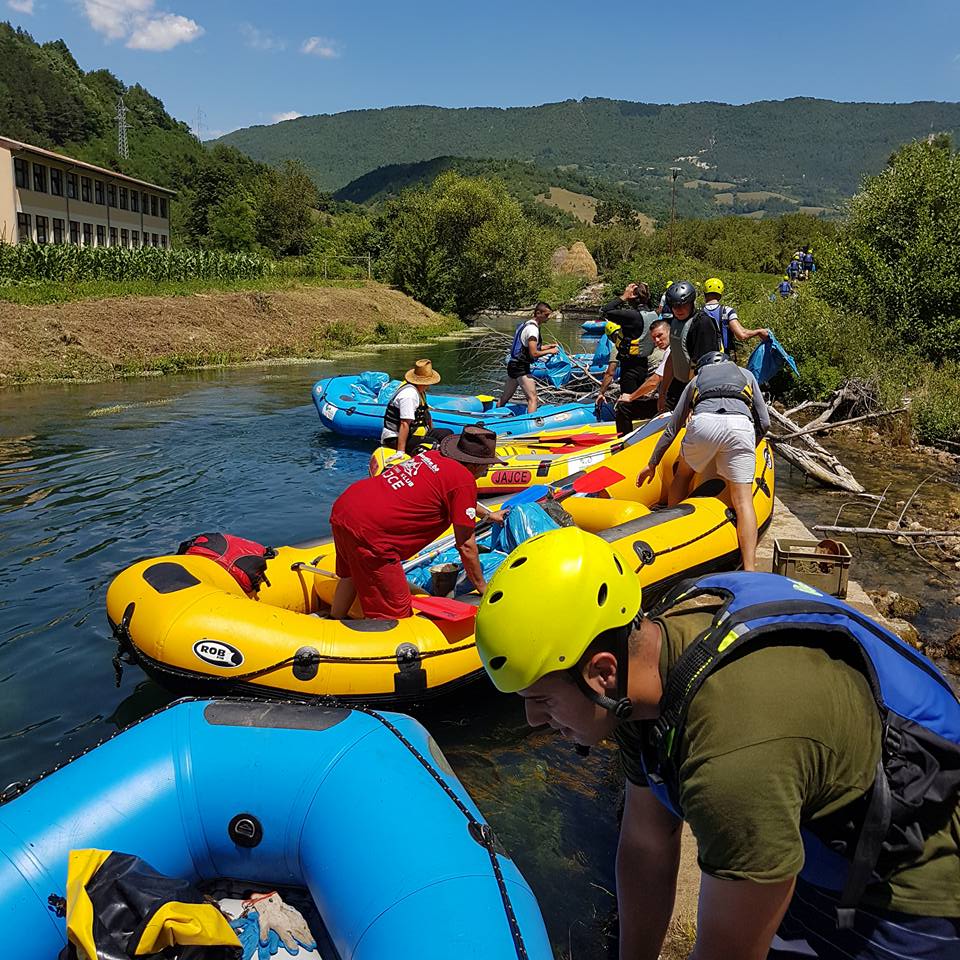 Under the slogan “Clean Pliva, Clean Jezero”, and in the organization of the municipal administration and the Mayor of the Municipality, Snežana Ružičić, the inhabitants of Jezero gathered together with the rafters of the Banja Luka Kanjon as project bearer and their colleagues from RK Dabar from Donji Vakuf and RK Jajce from Jajce to clean the River Pliva and its coastline. Apart from the rafter and locals, the Armed Forces of Bosnia and Herzegovina have been involved in the action from the very beginning. A large number of residents responded to the action, so the mayor of the municipality had many reasons for satisfaction. “We organized today with the intention to get involved, to the maximum, in this project launched by and implemented by the Banja Luka rafting club Kanjon. We are glad to have become an integral part of one, really, great initiative. We really owe a great gratitude to these people, and to the rafters and members of the Armed Forces who devotedly cleaned the River Pliva on the territory of the municipality of Jezero. I am particularly pleased with the fact that many of our citizens have become involved in today's action, many young people, which is very important because Pliva is the largest and most important resource of our small municipalities”, the Mayor of the municipality of Jezero announced.

“The last stage of the ecological regatta, which is being realized within the Initiative for Clean Vrbas, has been worked out. From the early morning, rafters and members of the Armed Forces took part in the action, and a large number of locals joined them”, it was said by the president of the Banja Luka rafting club Canyon, Aleksandar Pastir, not hiding the satisfaction with the reaction of the locals and a good lunch for participation in the action. “Today we have done a really big job. We, rafters, members of the Armed Forces of Bosnia and Herzegovina, and the locals. All together. In the action itself, a really large number of people have joined, and I thank the mayor of the municipality for the excellent organization and support that we have received. Throughout the course of both Vrbas and Pliva, we had the support of local authorities and locals, and I get the impression that there are still a greater number of those who have realized the importance of what we do. Nevertheless, I recall that we are not a communal company, and that the goal of such actions is to encourage people to think, encourage local authorities to do everything that to prevent such things, simply save our rivers, save Vrbas and its tributaries”, Pastir said. He emphasized that the action, from the first stage, from Donji Vakuf, to the present day, has been as planned, that the weather conditions of the organizers and participants of the action went hand in hand, and that in the next few days, after analyzing and collecting data from all stages, the real effects of the action will be revealed. We recall that the action of cleaning Vrbas and Pliva began on July 4 after the meeting of the Initiative for Clean Vrbas in Donji Vakuf, and the final of the action is the Big Touristic Regatta from Krupa to Vrbas to Banja Luka, which will be held on August 12, 2017.